VMware Workstation 12 Pro has recently been released. It appears VMware’s parent company is releasing newer versions every 6 months, even before you finished installing and testing the previous versions.

These rapid releases could cost you lost of money to upgrade to the latest versions of the software. Some users are not very happy with how quickly newer versions get released and the cost to upgrade.

It wasn’t very long when we showed you how to install VMware workstation on Windows 8.1 here. Now version 12 Pro has recently been released.

VMware Player will let you run the same guest machines as VMware Workstation, but won’t include advanced features found in the Pro version.

I personally am very resourceful.. I get my hands on these programs for free. I won’t tell you how I get them, but I know where to go and download fully functional product for free.

Users can take advantage of the latest features in Windows 10 like Cortana, the personal digital assistant and the inking capabilities in the new Edge web browser, or begin building universal applications for Windows 10 devices.

Linux distributions like Ubuntu, Fedora, CentOS and others should function properly as well.

Some of the latest features that are included in this release are, enhanced graphics engine, improved performance, greater hardware compatibility and support for the latest VMware vCloud Air Incentive program.

I recently installed the latest version on my Windows 8 machine and it’s great. To learn how to install VMware Workstation, you can read this post.

When you’re done installing, you can go and install guest machines as you which.

Below is a screen shot of the VMware Workstation 12 Pro installed on my Windows 8 machine. 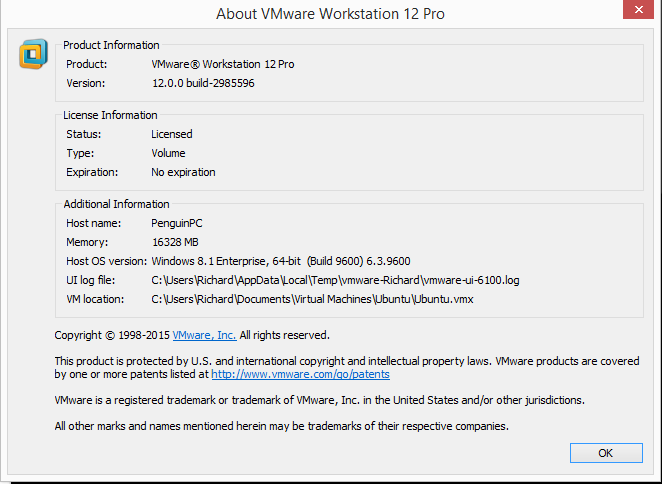