Opera Web browser hasn’t been updated for Linux systems since version 12.16, almost a year ago. At some point many Linux users thought the project was abandoned for Linux OS in favor of Windows, Mac OS X and other mobile operating systems.

Well, that changed this weekend when Opera 24.0 ‘development stream’ was released. It’s the most current version for Linux systems, including Ubuntu which is still in development.

The final stable version will probably come from this stream. For those Linux users who still want to use Opera, follow the download link to get it installed.

It seems like it’s only available for 64-bit Ubuntu systems at this time. There might be a workaround to get it in 32-bit but I haven’t tried it and don’t know if it works.

One major change in version 24 is the use of the Blink engine, developed as part of the Chromium project by Google. Another thing to note is how the Aura-powered UI is completely changed from the previous version.

Many familiar features we were used to in the previous versions have been removed, so there will be some adjustments to make when you installed version 24.0.

This brief tutorial is going to show you how to install Opera 24 on Ubuntu 14.04 64-bit machines.

To get started, use this download link to get version 24.

Clicking on the link above will automatically opens Ubuntu Software Center to install Opera browser. This is the default installer in Ubuntu 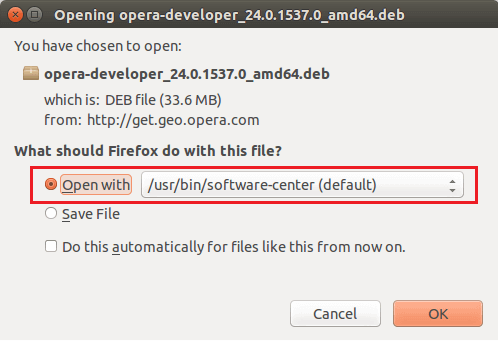 When Ubuntu Software opens, click the Install button to install Opera. You may be prompted to type your password to continue the installation. 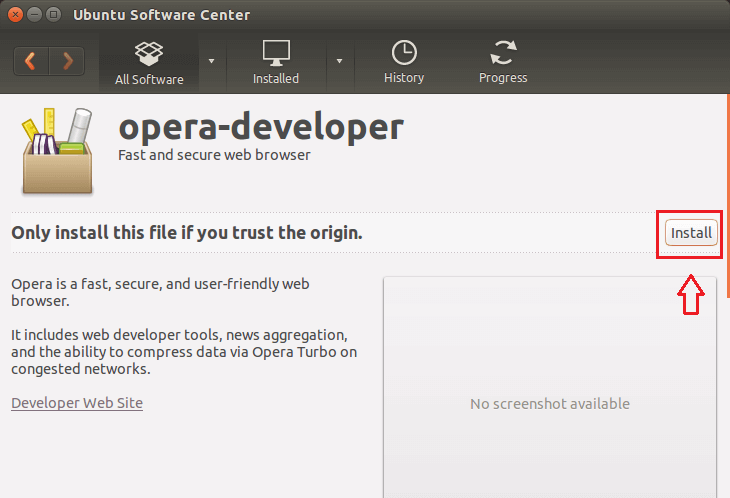 The installation should take too long for must systems. After installing, go to Unity Dash, search for Opera and run it. If you’re having trouble installing it via Software Center, you can download the file and use the command line to install it.

To do that, save the file instead of opening it with Software Center when prompted after clicking the link to download it. Then open the terminal console by press Ctrl — Alt — T on your keyboard. When it opens, go to your Downloads folder which is normally at ~/Downloads.

When you’re there, run the commands below to install Opera.

Launch the browser and enjoy! 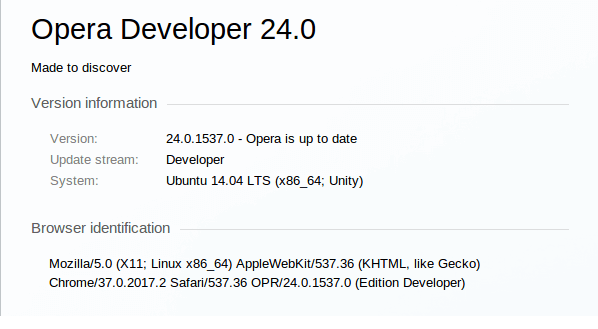