Firefox Web Browser was updated to version 21.0 today and chances are you’re not currently running it. The latest version brings support for more social provider for its Social APIs. Some providers you can now add to Firefox include Cliqz, Mixi, msnNOW and others. Also released in this version is enhanced three-sate UI for Do Not Track (DNT), preliminary implementation of Firefox Health Report and the ability to restore removed thumbnails on New Tab Page.

Besides releasing new features, this version also fixed bugs that were introduced in previous versions, like some function keys not working when pressed and a critical vulnerability that could allow attackers run code and install software, requiring no user input.

Below are some of the  changes in this version

This brief tutorial is going to show you how to easily upgrade in Windows, Mac OS X and Ubuntu 13.04 Raring Ringtail. A more detailed release notes can be found @ http://www.mozilla.org/en-US/firefox/21.0/releasenotes/

To get started with upgrading in Windows or Mac OS X, open Firefox and select Help –> About Firefox. Once there, Firefox will immediately begin downloading the latest version. After installing it, restart your browser to install it. 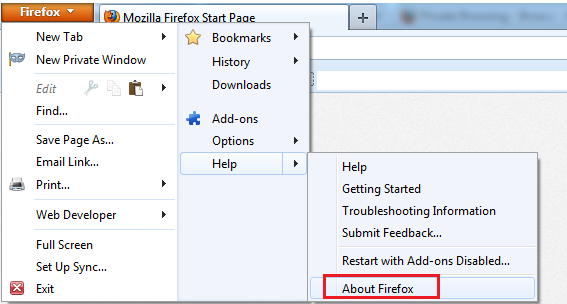 In Ubuntu, press Ctrl – Alt – T on your keyboard to open the terminal. When it opens, run the commands below to add its security PPA