Show Unity Launcher At The Bottom Of Your Screen In Ubuntu 16.04

One long awaited feature that was recently released as part of Ubuntu 16.04 is the ability to dock ot move the Unity Launcher to the bottom of your screen.

In previous version of Ubuntu, the launcher was installed at the left side of your screen with no easy way to move it around.. now with the released of Ubuntu 16.04 “Xenial Xerus” , one can change its location easily..

This brief tutorial is going to show you to do that with few commands.

Before we continue, lets make one this clear… with the new Unity 7, the launcher can only be moved to the left or the bottom of your screen..

At the time of writing this post, the launcher could not be docked at the top or the right side of your screen.

Now that we’ve made one thing clear… let’s go and dock our Unity launcher at the bottom.

To do that, open your terminal or command prompt in Ubuntu... you can access it by going to Unity Dash and searching for Terminal..

When the app opens, copy and paste the commands below and press Enter to change the location of the launcher to the bottom.

That’s it!  With in a second, the launcher will be docked at the bottom of your screen..

To change it back to the original location on the left, run the commands below.

Again, you can not move the launcher to the top of the right of your screen at this moment. There might be a way in the future, but not now.

That’s it and hope you enjoy it. 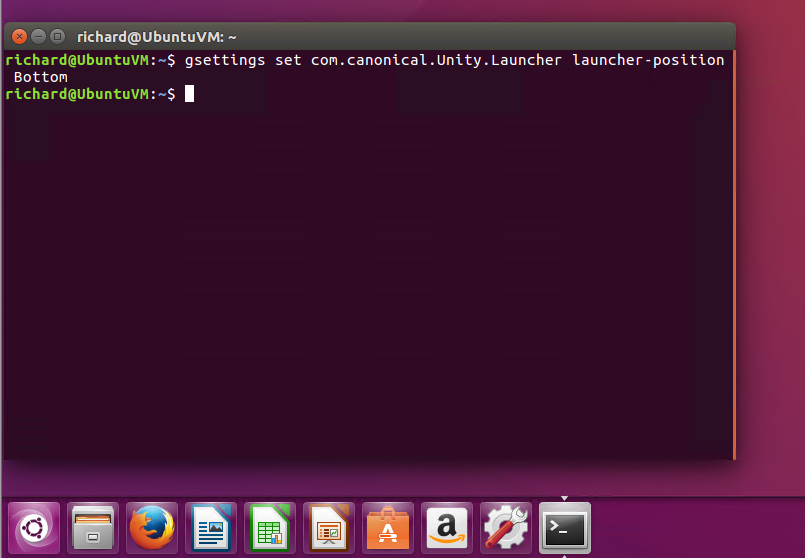