This brief tutorial is going to show you how to synchronize Microsoft OneDrive on your Ubuntu computer. OneDrive wasn’t designed with Linux OS in mind, so there has been no support from Microsoft for Linux systems, including Ubuntu.

One brave developer has started a project to get OneDrive onto Linux computers, and it’s successfully working on Ubuntu. Keep in mind that only one person is behind that project and the program is still in beta so some things might not work as expected.

I was able to run and synchronize my OneDrive content successfully in Ubuntu 14.04 with little errors. It might not work as well as it did for me so keep that in mind.

To get your content downloaded automatically, you’ll have to create a startup item and defind OneDrive-D command.

Again, this tool works, but it’s still be beta and only a single individual is maintaining it. Don’t raise your hopes too high.

When you’re ready, press Ctrl — Alt — T on your keyboard to open the terminal. When it opens, run the commands below to download OneDrive-D content from Github.

Next, run the commands below to extract the downloaded folder.

After unzipping the folder, change into the extracted folder and install OneDrive-D

After installing the packages, the program should launch its configuration dialog box. On this box it allows you to exclude file types, connect to OneDrive account and choose the local folder to sync OneDrive content to. 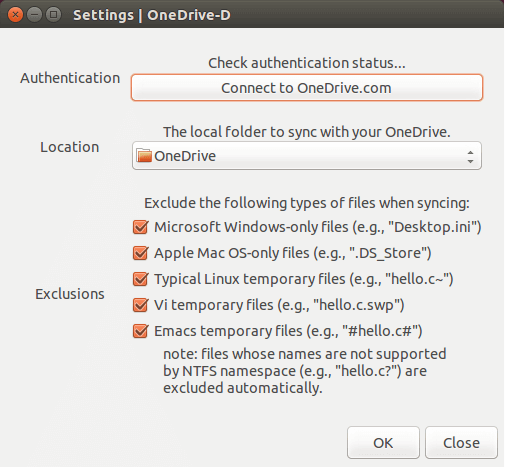 The easiest way to synchronize your OneDrive content is to create a startup item. To do that, open Unity Dash and search for Startup Application. Open it and create a new item with the command shown below.