Microsoft Windows 8.1 Preview Released — Here’s How To Automatically Boot Into The Desktop Mode

Yesterday, Microsoft announced the release of Windows 8.1 which is an update to Windows 8 that many folks had problems with. Windows 8.1 is Microsoft’s answer for those who may have issues with Windows 8. It comes with a Start button and an option that lets you boot directly into the Desktop Mode instead of Metro.

This brief guide is going to show you how to always start Windows 8 Desktop instead of launching Windows Metro after signing in. Starting the Desktop gives you option to the Start Button, taskbar, and others features that you won’t get when you boot into Metro.

Not being able to boot directly into Windows Desktop is something many have complained about since Windows 8 was released. There are third-party tool that help bring back the start button and option to directly boot into the Desktop, but nothing officially from Microsoft. This update seems like Microsoft’s response to that.

Since Windows 8.1 is still in preview, you must install a tool that will kick in the upgrade to 8.1. To Do that, open your browser and download it from here. After installing it, you’ll be prompted to head over to the apps store and install Windows 8.1.

The final version of Windows 8 will come with 8.1 updates so installing the tool first won’t be necessary. When you’ve updated to 8.1, sign onto Windows and open the Desktop. Then right-click on a blank area of the Taskbar and select Properties.

When dialog box opens, select the Navigation tab and check the box to ‘Go to the desktop instead of Start when I sign in’. 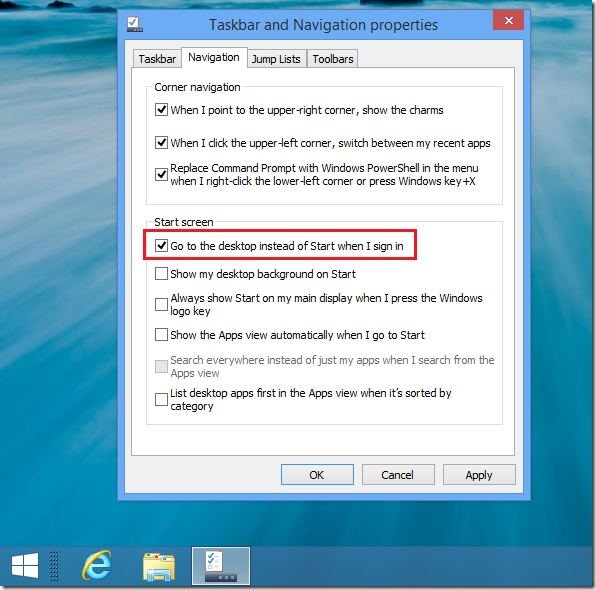 That’s it! The next time you restart your computer, it will boot directly into the desktop.