Windows 7 vs. Ubuntu 12.04: How to Disable Auto-Mount on Media Insertion

This brief tutorial is going to show you how to turn off automount on media insertion in both Windows 7 and Ubuntu 12.04 (Precise Pangolin). Both systems come with features that automatically mount media or devices upon insertion. It’s also known as auto-run/AutoPlay in Windows.

When this feature is enabled, anytime you insert a device or media (USB, CD/DVD), your computer automatically prompts you to choose what to do with the device. It gives you options such as whether to open Windows Explorer or AutoPlay the media. In Ubuntu it prompts whether to open Nautilus or AutoRun.
Well, this tutorial is going to show you how to turn it off so that you don’t get prompted anytime a media or device is inserted. Windows 7 and Ubuntu 12.04 may be different operating systems, but they’re almost similar in many functions. Almost anything you do in Windows 7 can be done in Ubuntu 12.04. And if you’re just starting out with Ubuntu, coming from Windows 7, this tutorial will help you better understand Ubuntu.

How to Disable AutoPlay in Windows 7

To turn of this feature, click ‘Start –>  and search for AutoPlay. 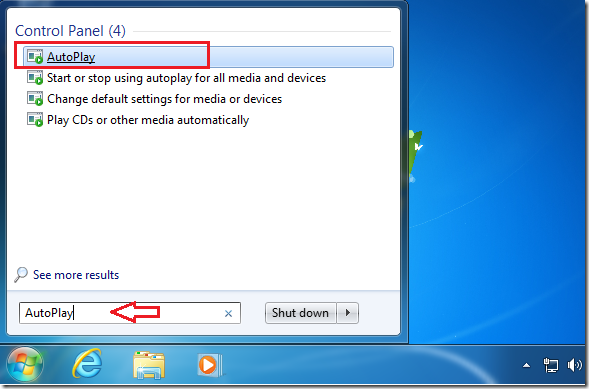 Finally, uncheck the box highlighted below: ‘Use AutoPlay for all media and devices’

That’s it. The next time you insert any media or device into your computer, it wouldn’t prompt you.

How to Disable AutoMount on Media Insertion in Ubuntu 12.04 (Precise Pangolin)

To turn this feature off in Ubuntu 12.04, press Ctrl – Alt – T on your keyboard to open Terminal. When it opens, run the commands below to disable it.