Adobe, the company behind Photoshop and other popular web authoring software has just released a new code editor called Brackets for Windows, Mac OS X and Linux systems, including Ubuntu. Brackets is an open source editor for web design and development that supports HTML, CSS and JavaScript. It was first released for Windows and Mac OS X systems and later for Linux machines.

This brief tutorial is going to show you how to install it in Ubuntu and test it out if you want to. Don’t go and start uninstalling other code editors you currently have, because this product, although useful, is not complete and may not be fully compatible with your system just yet.

Brackets is lightweight and streamlined when compared to other editors and has useful features like Code Preview and Quick Edit. Quick Edit allows you to change and modify a particular section a your code by right-clicking it and changing its properties.

The preview feature gives you live preview of the code by hovering you mouse over it. This editor, while still in development, may get even better and compete some of the best editors available today.

Here’s how to download it for Windows, Mac OS X and Linux systems, including Ubuntu. The Linux version is built as a .deb package, so all you need to do is download and open it with Ubuntu Software Center and install.

Below is a screen shot of it in Ubuntu 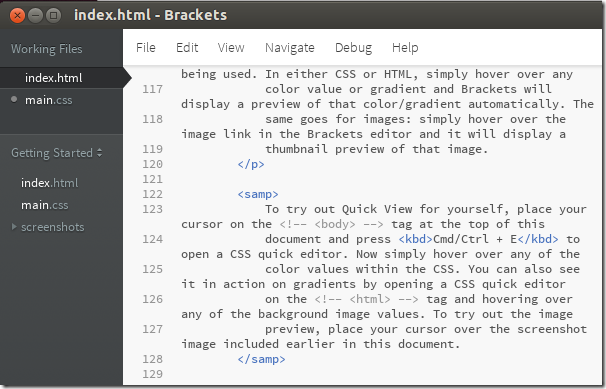 To install it, go and download the .deb package for 32-bit or 64-bit and open with Software Center. Windows and Mac systems can do the same by opening it with their respective package installer.

For more about Brackets, read this page.